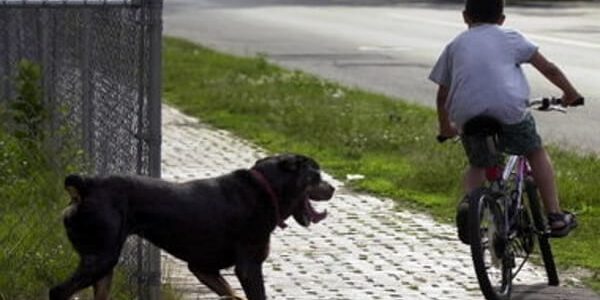 Some dogs enjoy chasing squirrels, rabbits, cats (especially cats), other dogs and things with wheels. As a form of protection, a dog may run out to bark at a bicyclist to deter them from coming onto their property… and the dog chasing a bicycle could be worse…

Entering a dog’s personal space, one must be prepared for the dog to enter into alarm mode. Loud barking and often snarls will be your warning, and if you don’t leave immediately, the dog cold potentially launch an attack. This involves snapping at your heels and an attempt to bring you down. A dog attack can throw any cyclist off balance, and cause serious injuries. Children or inexperienced cyclists and dogs just don’t mix, and these riders should never be allowed to ride where dog attacks can occur.

Dogs tend to attack a cyclist from the rear and or side, usually from the hindquarter direction. However, not all dogs pursue their victims viciously. You can determine whether or not the dog has serious intentions to harm you by noting the gait of the dog. If the dog feels threatened, he will chase faster than usual. His tail will point downward, with mouth open and ears cocked. We understand this may be hard to determine, especially if you’re trying to pedal like mad.

If you see a dog approaching from any direction, be sure to guard the front wheel of your bicycle. If the dog suddenly lunges in front of you, it can cause a you to collide and fall. Maneuver your bike to the farthest end of the road, and quickly ride away.

You could also yell loudly at the dog. This often doesn’t work as most dogs won’t listen to anyone but their owners, but it’s worth a try. So try to yell at the dog with commands, SIT, STAY, DOWN. This tactic could momentarily surprise the dog and cause him to hesitate. If successful, use the extra seconds and ride away as fast as possible. However if the dog is still in attack mode, ball up your fists and shout angrily. Most dogs are afraid of human violence and may not chase after someone who poses an apparent threat.

It’s important to realize that you can’t always outrun a dog. Bumpy roads or steep tracks can cause a cyclist to make a particularly slow getaway. Be prepared and know the area you’re riding in.

TIP: Place a small foghorn in the drink holder. The loud noise of the foghorn will often scare the dog away.

If all else fails and you can’t continue, call out for help. If the dog is serious in his attack, protect yourself by placing the bicycle in between you and the dog. DO NOT try to kick the dog as you could hurt them, as well, you may lose your balance and be susceptible to further attack.

If you are attacked or are bitten seek medical aid immediately and report the incident to the police. You could also file a complaint against the owners as any medical expenses would need to be covered. Best line of defense against any dog attack while your riding your bicycle is to simply be aware of your surroundings, the path you will be taking and knowing your neighborhood and the people within it.